In SQL Null is both a value and a keyword. Let's look at the NULL value first −

Simply put, NULL is just a placeholder for non-existent data. When performing insert operations on tables, these will be times when some field values ​​will not be available.

To meet the requirements of true relational database management systems, MySQL uses NULL as a placeholder for values ​​that have not been provided. The screenshot below shows what NULL values ​​look like in the database. 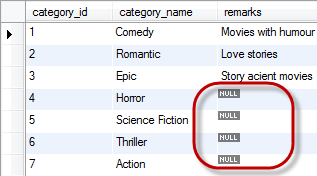 Let's now look at some of the basics of NULL before we delve into the discussion.

Executing the above script gives us the following results

Let's count all members who have updated their contact_number

Running the above query gives us the following results.

Note: values ​​that are NULL were not included

Why is NOT used?

There will be times when we will need to perform calculations on the result set of a query and return values. Performing any arithmetic operations on columns that are NULL returns null results. To avoid situations like this, we can use the NOT NULL clause to limit the results our data works with.

Let's assume that we want to create a table with certain fields that must always be provided with values ​​when new rows are inserted into the table. We can use the NOT NULL clause for a given field when creating a table.

Let's now try inserting a new record without specifying the employee's name and see what happens.

Running the above script in MySQL Workbench gives the following error -

NULL can also be used as a keyword when performing boolean operations on values ​​that include NULL. The keyword "IS / NOT" is used in conjunction with the word NULL for such purposes. The basic syntax when null is used as a keyword is as follows

Now let's look at a practical example that uses the NOT NULL keyword to exclude all column values ​​that have null values.

Continuing with the above example, let's say we want data on members whose contact number is not null. We can query like

Running the above query only returns records where the contact number is not null.

Let's say we want member records where the contact number is null. We can use the following query

Three-valued logic - performing logical operations in conditions that use NULL can return "Unknown", "True", or "False".

Suppose you are comparing number five with 5

Query result is 1 which means TRUE

Let's do the same operation with NULL

Let's look at another example

Query result is 0, which means FALSE

Allows the use of the IS NULL keyword

Query result is 0 which is FALSE